As a senior vice president at Newmark Pearson Commercial, Louis R. Ginise specializes in land and subdivision sales; acquisitions and land assembly; sales and leasing of warehouse and industrial buildings; and build-to-suit projects. He has also developed and leased a large number of office buildings and shopping centers.

Mr. Ginise has more than 54 years of industrial/commercial real estate experience in California's Central Valley and has been involved in more than 2,300 career transactions with sales and leases exceeding $450 million, resulting in Top Producer status for several years. He was named the Top Sales Broker in the Fresno market at the 2011 CoStar Power Broker awards.

Mr. Ginise has been with Newmark Pearson Commercial since 1965. During his tenure, he served as president of Pearson Realty Corporation from 1988 to 1993.

Mr. Ginise has been an active member of the Society of Industrial and Office Realtors (SIOR) since 1977. He served as president of its Northern California chapter in 1997 and chaired its National Research and Publications Committee in 1999. 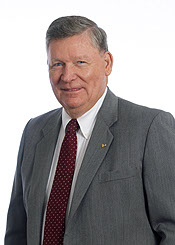