A senior vice president at Newmark Pearson Commercial since 2013, Nicholas Audino specializes in the sale, leasing, acquisition, disposition and ground-up development of industrial property throughout the Central San Joaquin Valley. Mr. Audino began his commercial real estate career in 1997 at CBRE, where he was a top producer every year from 2003 through 2013, and was Salesperson of the Year for six consecutive years.

Mr. Audino has continued his top performance status at Newmark Pearson Commercial: He was ranked a Top Three Producer for the past five years, and he was honored by his peers in 2014 and 2017 with the Peer Award, in recognition of maintaining the highest standards of personal integrity, superior work ethic and individual professionalism.

Mr. Audino holds a Bachelor of Science degree with an emphasis in land use and real estate economics from California State University, Fresno. 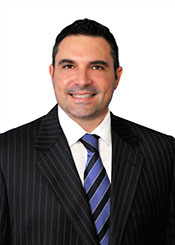